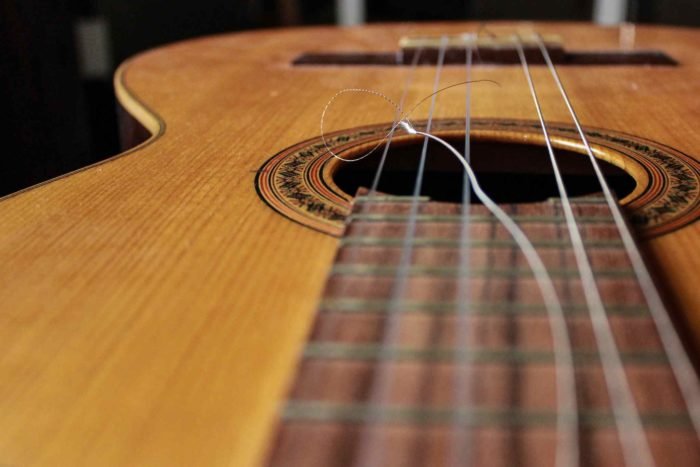 Guitars are fun instruments and easy to pick up. But when a string snaps for the first time, the strings become discolored, or the guitar just doesn’t sound as good anymore you’ll need to restring it.

But how much will it cost to restring your guitar?

If you string your own guitar you will just pay the cost of the strings. Generally guitar strings cost $5 – $20+; on the higher end I’ve seen strings for $30. Guitar stringing is an easy process, so don’t pay much more than the price of the stings to have a professional restring your guitar.

How To Restring a Guitar

Can I just restring my own guitar? Yes! It’s not a challenging process. Once you pick your strings you just need to remove the old ones, replace them with new ones, and tune it. You will need new strings and a wire cutter. For this guide, we will assume that your guitar uses strings with balls on one end.

Place your guitar on the floor or a table with cloth (towel or carpet) underneath it so that you don’t scratch it.

Use the tuning peg to decrease tension (flatten the pitch) on the low E string. Once the string has little tension, either clip it with a wire cutter, or continue turning the tuning peg until you can remove the wire from the hole of the post of the tuning machine.

Remove the bridge end of the string as well. For some guitars you simply pull the string through the bridge, others you will need to pop out a bridge pin first.

You can remove some of the other strings, but not all at once. It’s helpful to keep some tension on the front of the guitar.

Place the ball end of the appropriate string in the bridge hole. If your guitar has bridge pins they will likely have grooves. Slide the groove of the bridge pin over the string (so that the string secures nicely).

Clip off the excess string that sticks out of the machine head with a wire cutter. You want less than half inch of string sticking out.

Great now do steps 1 and 2 for all of the strings!

Congrats, all you need to do is tune your guitar and your ready to go.

If you are unclear on any part of the process, this video should help.

How Often Should You Restring a Guitar?

Interestingly, piano technicians only restring pianos after decades of use. However, guitar strings aren’t nearly as durable and are plucked with picks and greasy fingers instead of struck with felt hammers. As a result, they last much less long.

If you play for several hours a day, you may need to restring your guitar once a month.

If you play most days, then maybe once every several months.

If you just pick it up a couple times a week, you may just need to restring once or twice a year.

How Much Does it Cost to Restring a Guitar at Guitar Center?

My local Guitar Center charges $20 to restring a guitar on top of the cost of the strings. If it’s a unique guitar (extra strings, special string type) they may charge an extra $10. I assume other Guitar Centers vary in their pricing, but are in the same ball park.

How Much Does it Cost to Restring an Electric vs Acoustic Guitar?

Electric and acoustic guitar strings are comparable, so if you restring the guitar yourself you are still looking in the $5-$15 range.

Should I Replace One Guitar String or All of Them?

Because the high E string is thinnest it is most likely to break. Some string sets come with two high E strings. You may want to invest in such sets if you are interested in keeping similarly aged strings, while having the flexibility to replace high E strings that keep breaking.

How Do I Know if My Guitar Strings are Bad?

There are several symptoms that indicate your guitar strings need replaced.

Restringing your guitar is not an expensive process. If you do it on your own it will only cost you $5-$20 for a new set.

To replace your guitar strings, carefully remove the old ones, install the new ones, then tune it up.