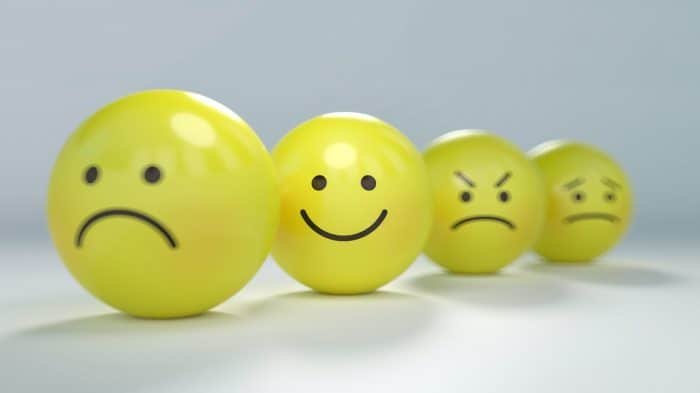 But what makes some songs cheerful, and others tearful? Arguably, the scale a song uses determines the emotional texture more than any other aspect. While there are many types of scales, in this article describes the differences between major and minor scales. It covers major vs minor scale construction (theory), hearing the difference between them (auditory), and the scientific basis for emotional associations of each.

Now consider a C major scale, which is all the “natural” notes or C D E F G A B C. Consider where the whole steps and half steps land. It creates the formula for a major scale which is “W W H W W W H”

Now you can take any starting note on the piano and construct the corresponding major scale.

Now we can make a formula for the minor scale.

So now you have the ability to take any starting note and make a major or minor scale. In the long run intermediate and advanced musicians will know all 12 major and 12 minor scales on their instrument.

For comparison, here are the two major and minor scale formulas.

Notice that the same sequence of whole and half notes are used, but with a different starting point. In other words, if you took the final red “W H” of the major scale formula (below) and placed it at the beginning you would have the minor scale formula.

But we aren’t yet done describing the difference between the major and minor scales. The formula above just describes a scale known as the natural minor scale. Let’s dive into all the minor scale terminology, this includes relative minor, parallel minor, natural minor, harmonic minor and melodic minor.

All Types of Minor Scales

There are three types of minor scales left, the natural, harmonic, and melodic minor scales. Terminology can get confusing at this point, so understand that:

So far we have only worked with natural minor scales; they always follow the “W H W W H W W” formula.

There is another way to discover the natural minor scale. Start by numbering the notes in a major scale 1 – 7, where 1 corresponds to the first note of the scale, 2 to the second etc; these numbers are known as the scale degree.

One way to arrive at the natural minor scale is to lower the 3rd, 6th, and 7th scale degrees. As expected the result is a scale that follows the W H W W H W W Minor formula that we already learned.

While this scale does create a minor, or melancholy and sad tonality, the flattened seventh scale degree causes some issues.

The solution is to create a minor scale with a natural 7th scale degree. This is the Harmonic Minor Scale shown below.

So why not just use the harmonic minor scale all the time? Several reasons:

To combat the second issue, composers sometimes turn the ♭6 back into a natural 6 and we have the melodic minor scale.

In the end, these three minor scales are used in minor keyed songs/pieces fluidly depending on the mood the composer is trying to invoke. Note that all have a ♭3, the most important note in creating a minor tonality.

These comments are based on this Michael News excellent youtube video on minor scales. At 1:56 seconds he discusses the need for more scales than just the natural minor scale; he provides auditory examples that are helpful in improving understanding.

Pharrel Williams’s “Happy” is the perfect example of a song in a major key. (He actually uses a major scale with a ♭7)

Adele’s “Fire to the Rain” is the perfect example of a sad song written in a minor key.

The Major = Happy, Minor = Sad isn’t always a good way to distinguish since there is an immense range of emotions music conveys. I find the following pieces more difficult to place; do you think they are predominantly major or minor?

The Wailin’ Jennys’ rendition of “Parting glass” is slow, with tight harmonies, and poetic lyrics about parting from earth. It pulls on the heart, with a deep, somber sound. Yet it is written in a major key (although it ends on a minor chord).

To me the start of Saint-Saën’s Aquarium from “Carnival of the Animals” is eerie but also sounds exciting, kinda like the start of a Pixar movie. This one is written in a minor key, but has surprising major chords interspersed throughout which I think adds the excitement and ambiguity.

Scientific Basis For Major and Minor

Some individuals of the Mafa population of north western Africa are unfamiliar with western music. However, in one study, they were able to recognize western music as happy, sad, or scarry/fearful. This suggests that aspects of our music innately invoke certain emotions. So why is major so associated with positive emotions and minor associated with negative emotions. Here are some theories:

The next step in you musically journey could be: