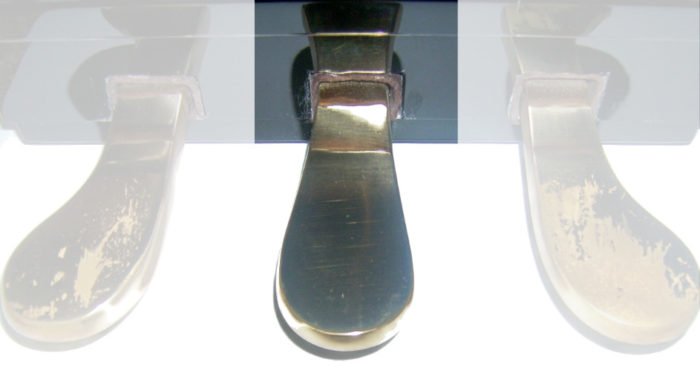 Comedian and pianist Victor Borge once said, “You know, some people have asked me why there are three pedals on these grand pianos. Well, the pedal in the middle is there to separate the two other pedals…which might be bad news for people with three feet” (source pianopricepoint.com).

So some think it’s useless, yet piano makers wouldn’t add it if it had absolutely no purpose. So what does the middle pedal on a piano do? There are four types of middle pedals – bass sustain pedals, sostenuto pedals, practice pedals, and silent pedals. Bass sustain pedals sustain only the lowest notes, sostenuto pedals selectively sustain notes, practice pedals softens the piano, and silent pedals mute pedals entirely. We’ll explore each type in this article.

What Does the Middle Pedal on a Grand Piano Do?

Recall that the damper pedal, or the right pedal, sustains notes by lifting the dampers off the strings. In the picture below, the dampers are the white and red arrow-shaped pads that rest on the strings.

A bass sustain pedal is a damper pedal that sustains only the lowest octaves.

Why is this useful? Often times the melody moves faster than the baseline, and sometimes the bass line includes a note that needs to be held out for a long time. With a bass sustain middle pedal, the pianist can hold out the bass notes without letting the melody line sound muddy.

Think of a sostenuto pedal as a selective damper pedal. With it you can choose to sustain some notes while dampening others.

How to Use the Sostenuto Pedal

Start by striking and holding down a key; then press down the sostenuto pedal. The note you played rings as long as the pedal is down. Unlike the damper pedal, you can play other notes staccato and they will not be sustained.

When to Use the Sostenuto Pedal

Just like bass sustain pedal, use the sostenuto pedal when there is a set of base notes that you need to hold for an extended period of time.

Consider the “A” in the following excerpt. If you hold the damper pedal down for the entirety of that note, the higher notes will become muddy. Instead apply the sostenuto pedal after striking the “A.” You are free to change the damper pedal more frequently for the high notes.

The sostenuto pedal was developed in the late 1870s, so there is not much classical repertoire that specifically calls for the pedal. Some pianist even think it’s unnecessary because:

What does the Middle Pedal on an Upright Piano Do?

Practice pedals make the piano softer and warmer. When you press a practice pedal a piece of felt lowers between the hammers and the strings.

The reduced volume and warm tone is ideal when someone is practicing but other activities are occurring in the vicinity.

In some snazzy new pianos the middle pedal activates an electronic system known as a silent system.

When activated, the silent system prevents hammers from striking the strings; this mutes the instrument entirely. Instead, electronic sensors pick up the velocities of the hammers and the system translates them into digital sounds. A pianist can use headphones to practice without interrupting others.

Hear is an example of a silent system in action.

How Does the Sostenuto Pedal Work?

The sostenuto pedal (selective sustain) requires the most sophisticated mechanical system of any of the pedals. I was curious to see how the system works. Fortunately Nahre Sol, one of my favorite piano YouTubers, put together a wonderful video on the topic.

You can watch the video for full details but the short of it is:

How Was the Sostenuto Pedal Invented

The sostenuto pedal has earned a place on high-end grand pianos even though pianists rarely use it. How did it get there? The answer points back 2 a bit of sleazy Steinway shenaniganry.

In May of 1874, Waldo Hanchett filed for a patent on a sostenuto pedal similar to the ones we use today. In the following months he sent his son to show the Steinways (creators of the famous Steinway and Sons piano company) his invention.

A journal entry from one of the Steinways indicates that the pedal impressed them. Instead of purchasing the pedal model from Hanchett, they created their own version of the mechanism. They sent in a patent to the patent office; they had some good connections with the office. They were able to expedite the process and within two weeks they had a patent, apparently the office didn’t find Waldo’s sostenuto pedal patent.

The (presumably smug) Steinways then told Hanchett that they weren’t interested in his pedal.

When Hanchett discovered that the Steinways patented a sostenuto pedal he sues.

And this is where the story gets interesting. In the early eighteen hundreds piano makers invented many types of pedals. Some pianos even had six or seven pedals for various effects.

Some European piano makers had created pedals that functioned similarly to the sostenuto pedal decades earlier.Through the course of the lawsuit, the Steinway’s discovered these records. They claimed that Hanchett was mimicking off of these earlier piano makers (he likely wasn’t).

In the end, the Steinways won the lawsuit. They were so fond of the pedal that it became standard in their piano designs. As Steinway and Sons gained clout as some of the best piano makers in the world, the sostenuto pedal became a permanent fixture in high-end grand pianos (source Fred Sturm on acadamia.edu).

Using the Middle Pedal with Joy?

On Find Your Melody I try to finish each post with a thought on engaging the topic in an enjoyable way. For this post I thought, “how on earth can the middle pedal be enjoyable to use, you either press it or you don’t.”

I almost didn’t include something, but after some poking around I gravitated to this quote on curiosity:

“Curiosity…allows you to embrace unfamiliar circumstances, giving you a greater opportunity to experience discovery and joy.”

So here is a quick improvisation exercise to unlock some curiosity (and hopefully joy) as you explore your piano’s middle pedal.

For inspiration I looked to a recording of a unique metal piano (below). It has felt between the hammers and strings similar to my piano’s practice pedal mechanism.

When I improvised with the practice pedal, I moved towards an interesting, contemplative, almost underwater sound. It was actually quite fun!

The middle pedal of the piano can have a wide variety of functions. They range from bass sustain, sostenuto, practice, and silent pedals. Try out the middle pedal on your piano to see what category yours falls into. Then experiment around with it. Unlock that music making curiosity so you can continue to develop joy at your instrument!

From here you may be interested in learning other piano basics such as simple warm-up stretching exercises.