How to Write Lead Sheet Symbols? A Complete Guide to Chord Notation
Skip to content 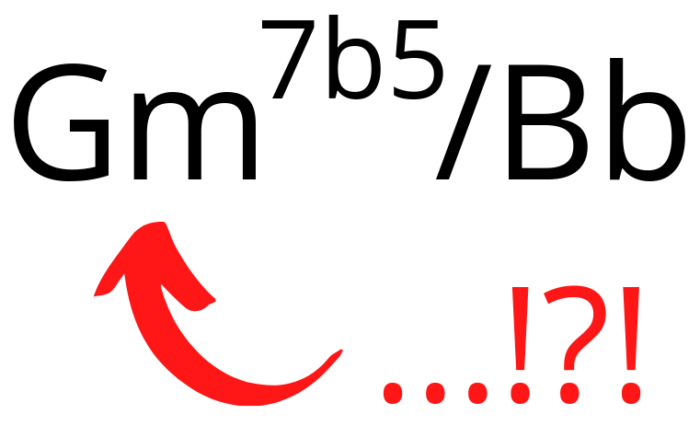 A lead sheet is a concise form of music notation that includes only the melody line and chord progression of a piece. They are great for capturing jazz, pop, and folk tunes, and make it possible for beginner and advanced musicians to approach the same sheet of music.

How Do You Write Lead Sheet Symbols?

Lead sheet symbols are written above the staff. The symbols represent the underlying chords to use for that section of music. These chords are often major, minor, diminished, augmented, or an extended chord. You use a new symbol above the staff each time the chord changes – typically once or twice a measure.

Here is a sample blueprint of a lead sheet chord symbol; don’t worry if you don’t understand all the terminology, we will get to that later.

Triads are the simplest chords, made of only 3 notes. (They are more common than dyads or tetrads). There are four types of triads – major, minor, diminished, and augmented.

You can read more detailed descriptions of each of the triads below but here are some examples of the notation used.

For review, the root of a chord is the note the rest of the chord is based off of. The root of a D major triad is “D.”

Scrambling the order of a chord does not change its name. So if you see a chord with E, G and C where E is the lowest note of the chord, this is still a C major triad (it’s just inverted).

Since major chords are so common, assume a chord is major unless specified otherwise. So if you see a “G” that is a G major triad.

A minor triad is the same as a major triad, except the 2nd note of the chord is a half step lower. For example, if our C major triad was C, E, and G, lower the second note from E to E♭ to get a C minor triad.

Again the notation for minor chords is “m” or “-“. For example, Cm and C- both indicate C minor triads.

Augmented triads are the least common of all. They are major triads with the 3rd note of the triad raised a half step. Our C major chord was C, E, and G, so our C augmented triad is C, E, and G♯.

To understand extended chords we need to first understand the chord/scale numbering system.

Chords are based off of scales. So let’s consider a numbered C major scale

With 7th chords the notation doesn’t follow rules very well. In general we assume that the 7th is flatted – a B♭ in our case.

There are 8 – 16 possible 7th chords (depending on how you count). The most common are in the list below.

As we talk about extended chords let’s extend our numbering system.

An “add” chord is a basic triad with only the specified tones added in. Here are some examples:

Sus chords are similar to add chords, but with a sus chord you actually substitute the 3rd of a basic triad for either a 4th or a 2nd.

They almost always resolve to a standard major or minor triad. Here are some examples:

Slash chords include a “/” symbol, and indicate a note to be played below the main chord. When you see the slash you can think “over” in your head,

For example, G/B indicates that you play a G chord over a B – the spelling is B D G (instead of G B D). In this case we have a simple inversion of a G major chord.

G/A is another example of a slash chord, but in this case the A is not part of a standard G major chord – this creates a unique sound.

Are Lead Sheet Symbols Ever Lowercase?

How To Read a Lead Sheet

Now that you know how to write lead sheet symbols, you can write your own lead sheets, or start reading lead sheets on a piano. If you are new to this, you can start by:

But for more tips on how to make that work, check out this article.